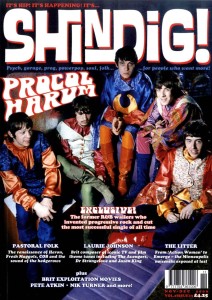 It was exciting for this former Montrealer to head down to the city’s very first garage festival. Set in the restored Théâtre Plaza, a stunning 1920’s former cinema, the festival was the brainchild of two dedicated and courageous garage fans turned promoters, Teenbeat Takeover’s Oliver Bessner and Matt Fiorentino. The duo gathered an impressive array of garage freaks past and present. Question Mark and The Mysterians, The Electric Prunes and The Alarm Clocks represented the legendary and quite rocking original contingent; Montreal’s The Gruesomes, the West Coast’s Morlocks, The Flakes and The Nashville Ramblers, and Minneapolis’ The Hypstrz delivered as the “second wave”; and current faves, New York’s  A-Bones, Detroit’s Fortune and Maltese, the U.K.’s Higher State, Boston’s Muck and the Mires, Toronto’s Saffron Sect, San Francisco’s Nagg and locals Les Breastfeeders and Sunday Sinners proved once more that the garage scene is alive and well somewhere, at any given time. Like any garage fest worthy of its name, guest DJs from around North America had the restless and enthusiastic crowd grooving in between sets, and the weekend started things off on a high note by premiering (in Canada) the documentary “America’s Lost Band: The Remains”.

A fan such a myself can sometimes be overly critical of such three-day events, especially after having attended more than a few in the past and being horribly sleep-deprived. Yet the quality of the performances, the positive and peaceful energy emanating from the festival goers, and the diversity of the genres we now include under the umbrella term of “garage” (folk-rock, psych, freakbeat, frat-rock… need I go on?) present at the Wooly Weekend overall contributed to create a fantastic showcase for bands, and independent record and fanzine distributors. Lets not forget it also provided a jolly good time for all and a chance to shake our derrières. The event was an excellent reminder of why we got into this music in the first place. Bravo to the first garage fest in Montreal, and here’s wishing for another in the future.